The History of Val Thorens

Human settlement in the Val Thorens area can be dated back to as early as 2000BC, artifacts from the Iron Age have been found, even 1980’s bright green and pink one piece ski suits have been unearthed, this is the History of Val Thorens the highest ski resort in Europe.

Pre 1914 the Belleville valley which Val Thorens is now at the top of was mainly home to farmers and their livestock. The world changed in 1914 with the first of the world wars which saw many of the locals fight for their country but sadly a lot less came back.

The ones that did come back either carried on with their farms or moved to bigger towns like Moutiers (at the bottom of the valley) drawn by the new Hydroelectric and steel industry.

In 1967 work started on creating a purpose built ski resort in the Belleville valley, this was named Les Menuires. Time was against them and most likely cost too therefore they used materials that would help speed things up. Mainly concrete which is now blamed at making the resort ugly (Les Menuires has recently been given a make over and looks a lot nicer).

Shortly afterwards in 1969 they extended the road further up the valley to the base of Aiguille de Peclet (Mount Peclet) to build another ski resort called Val Thorens.

The initial plans were actually to build two ski resorts, Val Thorens for service the Tarentaise side with Val Chaviere for the Maurienne side. They would share the glacier between them. However Val Chaviere was not permitted due to proximity to the restricted Vanoise National Park. Incidentally although the Val Chaviere resort was never built there is a Hotel in Val Thorens named after it, the Hotel Val Chaviere.

The main people involved in creating Val Thorens were:

You still today might see some of these names around Val Thorens. Jean Béranger has a piste named after him (skiers left from the top of Telecabin de Peclet) as well as Christine Goitschel (skiers left off the top of the 3 Vallees chair lift). The Val Thorens community centre found in the peclet area of the resort is named after Joseph Fontanet (sadly assassinated in Paris in 1980 possibly due to his connections to the resistance in the war).

1971 was the BIG year for Val Thorens, it was when the first 3 drag lifts were installed on the 18th December and considered the birthday of Val Thorens. The following year Jean Béranger set up the first ski school of the resort ESF. He also created the Club des Sports to help develop local ski talent as well as the Tourist Office. Back then in 1972 there were only 4 or 5 families living in Val Thorens, today there are about 200 people who live there all year around.

In 1972 they also founded SETAM (la Société Téléphériques Tarentaise et Maurienne), this company managed and developed the ski lift system for the valley. Today SETAM still design and create new ski lifts for Val Thorens and is credited for making one of the best lift system in Europe, if not the world.

Also in 1972 (a busy year) they created the first apartment building, this was in the Peclet area of Val Thorens. The first restaurant was built and called Le Gloulou, since then it has changed names so many times, at the moment it is called Panda which is a bar not a restaurant.

In 1973/4 they decided to open up the glacier for skiing which provided skiing all year round. They installed a couple of drag lifts roughly where the Le Col lift is now, this is the area they would have created the Val Chaviere resort. There is a small hut still there which we think mountain guides sometimes still use. Sadly due to the reseeding ice the resort had to stop summer skiing in 1987, the removed the lifts a lot later in 2002.

A few years later in 1979 they decided to create a new area to ski in, this was called Caron. This area today is very popular with weekend skiers as it is quick and easy to get skiing from the close car park. In 1982 they installed the Worlds largest cable car the 150 person Cime de Caron, once again SETAM showed the way! 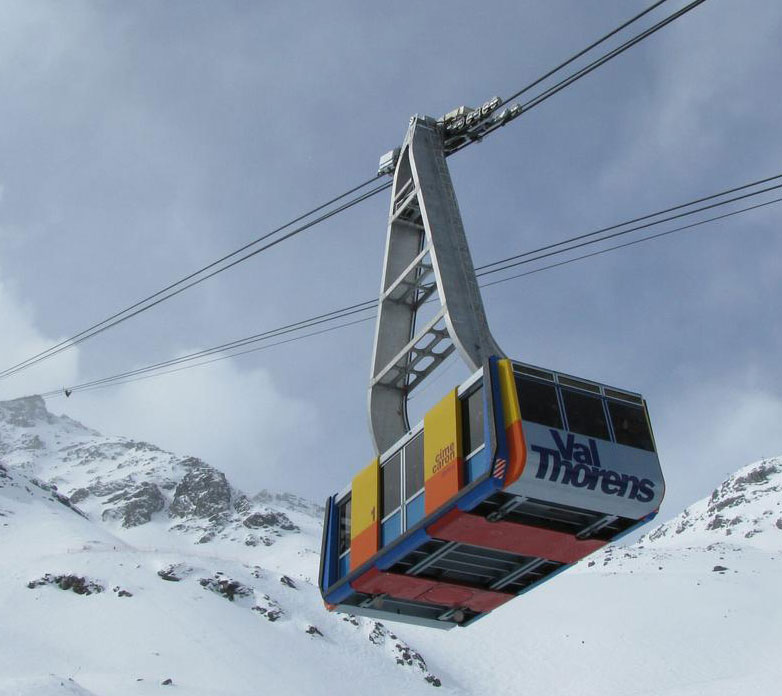 1980 Val Thorens had a brand new Sports Centre built in the centre of the resort. It was also one of the last buildings to be built using the ugly concrete, from now on only wood, stone and local materials.

The resort was so worried about it looking ugly they started wood cladding most of the buildings to make the resort look more pleasing to the eye, however the reputation of Val Thorens being ugly had already begun.

Learning from their mistakes when the Mayor made St Martin de Belleville a ski resort in the 1980s they were only allowed to use wood and stone and in doing so have made a beautiful village even today.

In the 1990s we saw a huge investment from SATEM the lift company, installing the Funitel Peclet which using two parallel cables made it very stable in high winds which being 2300m up it can get a bit windy. This design was later sold all over the world, but Val Thorens had it first! 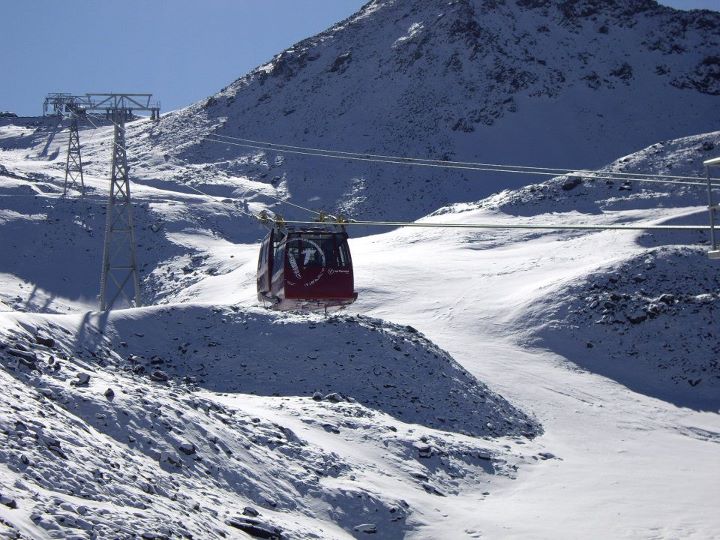 In 1992 Albertville hosted the Winter Olympic games, although Albertville isn’t a ski resort it was surrounded by many. So they shared the snow sports over many resorts, sadly Val Thorens wasn’t given a sport to host however Les Menuires did host the Mens Slalom. This was not all bad for Val Thorens though, due to the Olympics they upgraded the N90 road which we all use from Albertville to Moutiers cutting transfer time greatly.

In 1993 Val Thorens had a brand new Church, although you can not marry in this church (nearest place you can marry is in St Martin de Belleville) you can have a blessing there. Apart from a little extension and some work done on the roof it hasn’t changed much over the years.

In the years 2005/6 Val Thorens wood clad the remaining buildings, this made a big difference to the resort, it was almost Alpine looking!

If 1972 was the birthday of Val Thorens, we think 2010 was the biggest milestone in it’s history. Recognising the value of the highest ski resort in Europe the French government allowed further expansion to the resort. For the last 10 years they had been trying to decide how they could increase the numbers of skiers on the mountain, the problem was that on one side there is the protected Vanoise National Park which they were not allow to touch (quite right too!). They drew up several plans which included:

After years of “thinking” about this they choose option 3, and they haven’t looked back since!

The Cime de Caron lift in 2010 was nearly 30 years old, SETAM decided to invest a huge sum of money to replace this lift with Panoramic cabins. This made the ride up the mountain more enjoyable, unless of course if you don’t like heights! 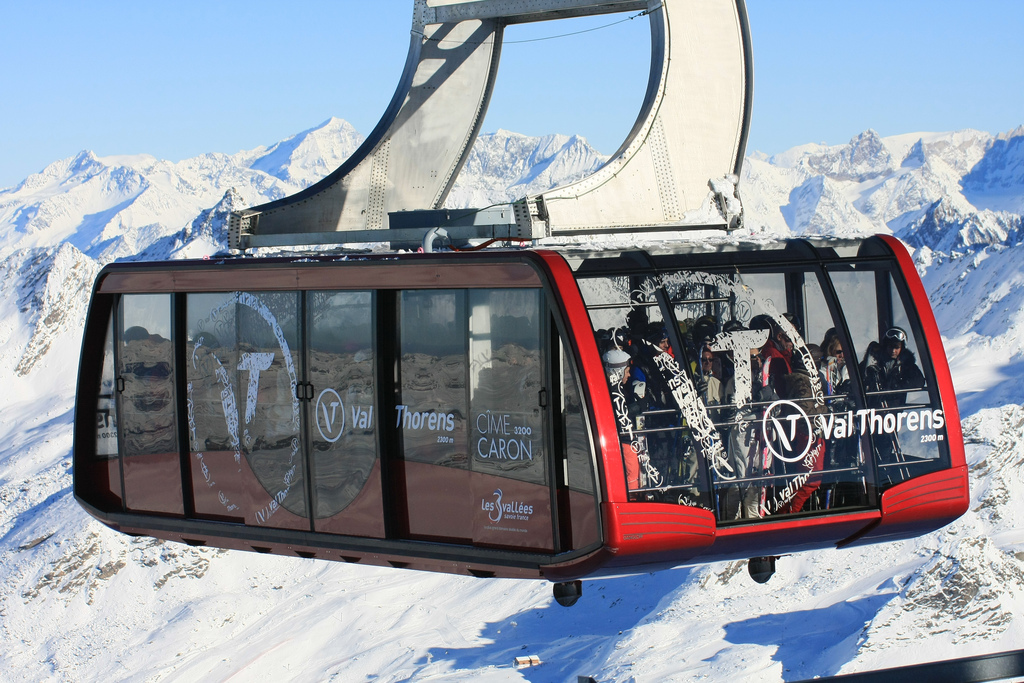 Additionally, in 2010 they added new pistes for beginners the Musaraigne and Campognois as well as the blue piste L’Eteriou which allows beginners access to the Grand Fond lift so they can take in the views from the top at 3000m. The snow park was also extended quite considerably and a new piste on the Plein Sud side.

In 2011/12 we saw the new lift Funitel de Thorens which opened up a completely new area to ski, remember that protected Vanoise National Park hmm!

In 2013 they upgraded more lifts and a few name changes along the way. The Bouquetin has sadly been renamed the Funitel 3 vallees as it’s the main route back to the other ski resorts in the 3 valleys. The 3 valleys 1 lift is now called TSC Les Pionniers and replaced with a fancy hybrid lift. The 3 Vallees 2 lift is now called TSD 3 vallees and again been upgraded to a detachable 4 seater chair lift. The chair lift called 2 Lacs got replaced too with another detachable 4 seater.

New Hotels have sprouted up from the “holes in the resort”, all 4 or 5 stars too!

So what’s next for Val Thorens?

Don't miss out on the latest Ski News and Ski Holiday Offers, sign up to THE Ski Newsletter!